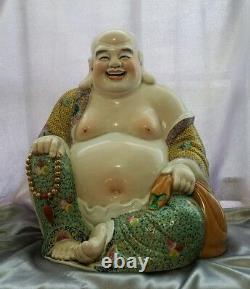 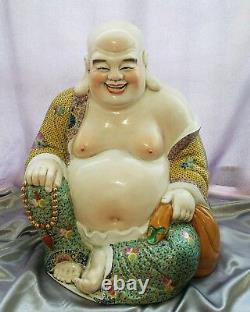 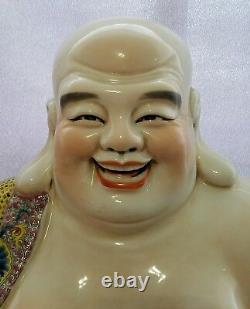 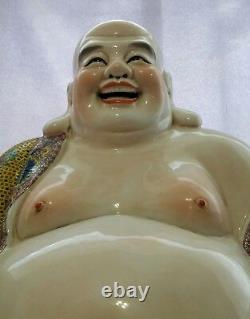 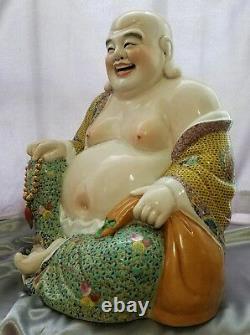 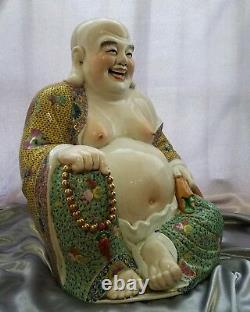 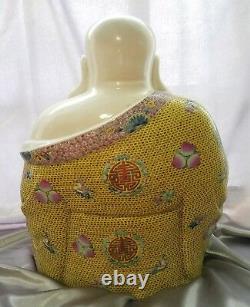 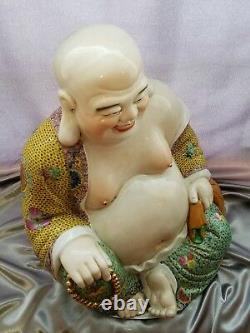 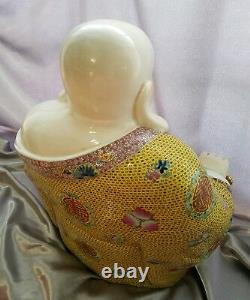 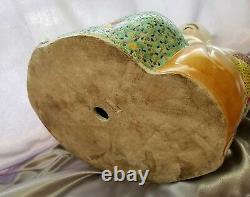 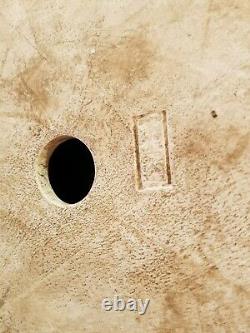 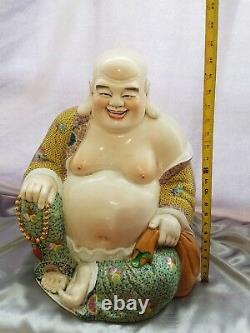 Impressed seal mark to underside. The Shou symbol is a powerful Asian icon that represents long life and immortality. It is a symbol that comes from the Taoist philosophy which touts connection with Nature as the true way or path to enlightenment.

This symbol is prolific in Asian art to denote happiness, harmonic life and longevity. Throughout Asia, the crane is a symbol of happiness and eternal youth.

In Japan, the crane is one of the mystical or holy creatures (others include the dragon and the tortoise) and symbolizes good fortune and longevity because of its fabled life span of a thousand years. Peaches symbolizing immortality (or the wish for a long and healthy life) are a common symbol in Chinese art, appearing in depictions or descriptions in a number of fables, paintings, and other forms of art, often in association with thematically similar iconography, such as certain deities or immortals or other..

The base has an impressed Chop Mark. Please see all images of this amazing antique Buddha.

Photos are taken to represent each item as clearly and thoughrouly as possible. Please review each carefully and take into consideration all details as much as possible when purchasing. According to Chinese history, Budai was an eccentric Chán monk Chinese:? Pinyin: chán who lived in China during the Later Liang Dynasty (907-923 CE).

He was a native of Fenghua, and his Buddhist name was Qieci Chinese:?? Pinyin: qièci; literally "Promise this".

He was considered a man of good and loving character. The term buddha means "one who is awake", connoting one who has awakened into enlightenment. Over the history of Buddhism, there have been several notable figures who would come to be remembered as, and referred to as, buddhas.

Later followers of the Chan school would come to teach that all beings possess Buddha nature within them, and are already enlightened, but have yet to realize it. This teaching would continue into Zen. Budai is often conflated with (or simply replaces) the historical Buddha, Siddhartha Gautama, in spite of the distinct visual differences in how each has been depicted. In India, Nepal, and throughout southeast Asia, Gautama (who lived during the 6th century BCE) is commonly depicted as being tall and slender in appearance. In contrast, in China and those areas to which Chinese cultural influence spread, the depiction of Budai (who lived during the 10th century CE) is consistently short and round.

Budai in folklore is admired for his happiness, plenitude, and wisdom of contentment. One belief popular in folklore maintains that rubbing his belly brings wealth, good luck, and prosperity. In Japan, Hotei persists in folklore as one of the Seven Lucky Gods (Shichi Fukujin) of Taoism. God of Contentment & Happiness Origin = China Taoism / Buddhism Chinese Name Budai or Putai Said to be an incarnation of Miroku Bosatsu Miroku in China is known as Miluo Fo (or as Miluo Pusa) Hotei known as the Fat Buddha or Laughing Buddha in the West Hotei is one of Japan's Seven Lucky Gods.

Reportedly based on a real person. The god of contentment and happiness, guardian of children, and patron of bartenders.

Has a cheerful face and a big belly. He is supposedly based on an actual person, and is widely recognized outside of Japan as the Fat, Laughing Buddha. He carries a large cloth bag over his back Nunobukuro?? = cloth bag, one that never empties, for he uses it to feed the poor and needy. It includes an inexhaustible cache of treasures, including food and drink. Indeed, the Japanese spelling of "Hotei" literally means cloth bag. He also holds a Chinese fan called an oogi?

(said to be a "wish giving" fan -- in the distant past, this type of fan was used by the aristocracy to indicate to vassals that their requests would be granted). Hotei is most likely based on the itinerant 10th-century Chinese Buddhist monk and hermit Budaishi d. 917, who is said to be an incarnation of Miroku Bodhisattva (Maitreya in Sanskrit).